First showcased at CES 2014, LG has began releasing it’s next generation of smart appliances. LG HomeChat allows users to communicate with all of their LG appliances with the popular free mobile messenger, ‘LINE’. Achieving a whole new level of convenience and allowing users to control all of their appliances from a single device, the new line from LG features a refrigerator that can you text you how many beers are in the fridge, and washing machine that you can send a text to when you’re running late to adjust the start time of your laundry. 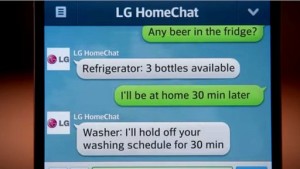 From the convenience of their phone, users can tell their HOM-BOT Robotic vacuum when they would like it to start vacuuming as well as whether it should go in a zig zag pattern or cell by cell. The HOM-BOT can even message back with status updates and pictures of it’s voyage. Wondering what’s in your refrigerator? Shoot a text to your fridge asking how many bottles of water on the shelf and it will almost instantly reply back. 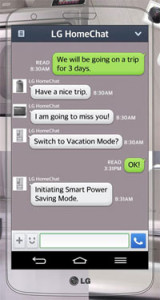 LG has began releasing the LG HomeChat Appliances in it’s home country of S. Korea and officials from the company say that soon users in the U.S. and throughout Europe will begin to see these smart appliances in local stores. So the next time your phone goes off, it just might be your washing machine updating you with it’s plan to clean a particularly soiled shirt.